A million views on You Tube 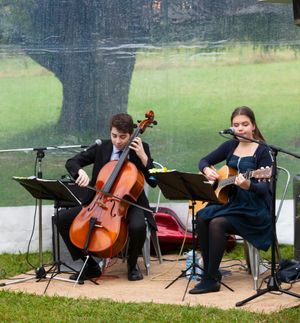 Nyssa and Alex are a brother/sister duo that plays acoustic pop and French music. They have a chilled and relaxed style with the cello giving a unique sound, playing both bass and melodic lines.  Nyssa’s voice is delightfully pure and unaffected and their harmonies float reminiscently like Simon and Garfunkel. Their influences include Ed Sheeran and Gabrielle Aplin.

“Featuring primarily a guitar, a cello, and vocals, Nyssa And Alex are a beaming example of how less can be more. The duo are rapidly making their names known, pricking up ears well beyond their hometown of Bowral.” Six8

Their beautiful acoustic sound adds a touch of class, which has made them sought after for exclusive functions and weddings at venues all around the Southern Highlands and Illawarra regions.

They can also be heard performing regularly at markets in Bowral, Kiama and Wollongong.

With 5 years of experience they have played live for ABC Radio, performed at the weddings of celebrities and sung the National Anthem for the beach soccer final between Australia and Thailand in Wollongong. The duo has a large French following as Nyssa's French cover of ‘Andalouse’ reached over one million views. Producers quickly contacted her to participate in ‘The Voice’ in France. In 2018 they released their debut original EP titled ‘Seasons’ with an official music video shot in France.

They have their CD’s “Joie de Vivre”, Covers and their original album Seasons available on their music page.

Teresa Dunn and Skye Leckie
Nyssa and Alex, Thank you so much for entertaining us at our recent eventwith your beautiful music. You are both incredibly talented and veryprofessional. It was an absolute pleasure watching you play and listening towhat can only be described as the voice of an angel. Highlands Private Concierge.

Lauren Hart
Hi Nyssa and Alex, I just wanted to say a big thank you on behalf of myself, Shaun and our families for performing at our wedding. I can honestly say that our wedding would not have been the same without you. You guys are amazing!

David Brinson
My wife heard you on Local ABC and has become a great fan! ….
Thank you so much for playing at Belinda's party on Saturday night we really loved hearing you play! We look forward to seeing where your musical talent takes you both. We're sure we'll be seeing you do great things.

Jess Sutherland
Nyssa and Alex were just wonderful!!!! They really did add to the mood of the day and everyone commented on how talented and professional they both are.

Natalie Rouland & Daniel.
I just wanted to say a huge thank you to both Nyssa and Alex for providing such beautiful music for my ceremony on Saturday. We had many guests commenting on how good they sounded and how they made such a lovely atmosphere during the ceremony and canapés.  We would definitely recommend them to others. Thank you also for great organisation!

Sandy & Tony Whykes
You are two very talented musicians and we thank you so much for the ease of communicating with you before & during our wedding.Your voices are unbelievably beautiful. We have recommended you to loads of friends.  Once again thank you from the bottom of our hearts.

Sophie and Stuey
We just wanted to say how grateful we were to have Nyssa and Alex performing for us on Saturday afternoon. They were fantastic and all of our guests were blown away with how incredibly talented they were - especially so young! They were incredible! Please pass on our gratitude and also thanks to you for all of your help organising them. We will definitely be keeping an eye out for them in the future - they're bound to be superstars!